People living with HIV with an undetectable
viral load cannot pass on HIV to their sexual partners. 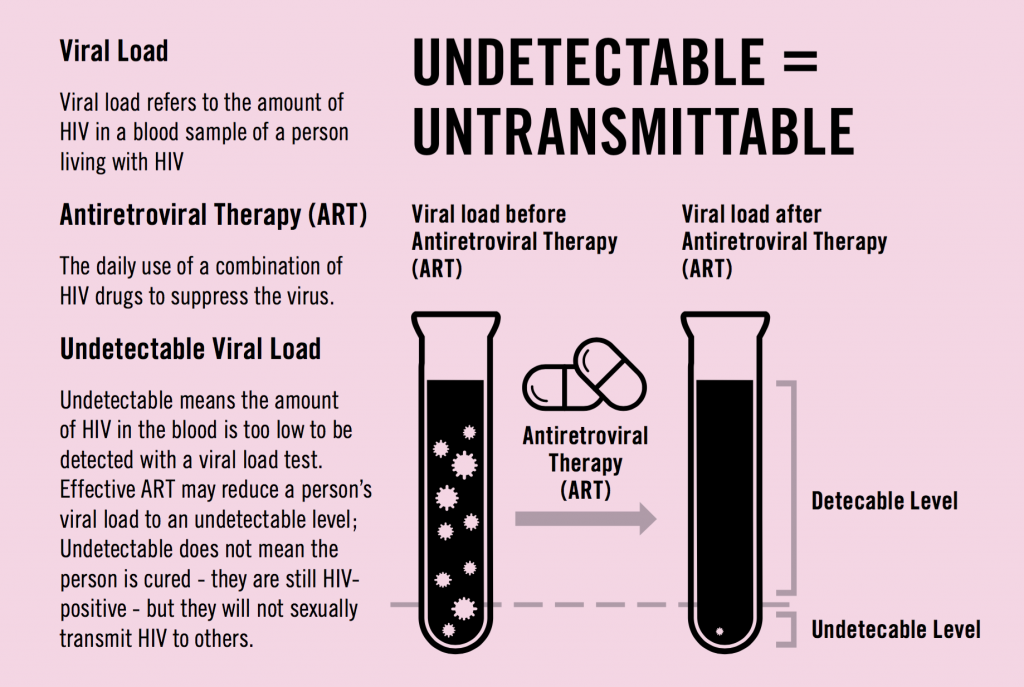 Have you noticed the hashtag  #UequalsU? Wondered what it means? Well it’s pretty simple, it stands for “undetectable = untransmittable” and it means that if you you have HIV, are on effective treatment, and your viral load is undetectable you won’t pass along HIV to a sexual partner.

That’s true whether or not you use a condom or if your HIV-negative partner is using PrEP or not. As long as the medication has suppressed the virus and you continue to take your medication as prescribed, you don’t need to worry about passing on HIV through sex.

ACT UP Dublin is proud to be a community partner in the “U Equals U” campaign started by the Prevention Access Campaign.

In May 2019 we launched a campaign on video screens around Dublin and Cork promoting the U=U message to a wider audience. We’re grateful for the enthusiastic support from Micromedia. Read more about the video campaign at our post here.

As a community partner, we enthusiastically endorse the U=U Consensus Statement which reads:

“People living with HIV on ART with an undetectable viral load in their blood have a negligible risk of sexual transmission of HIV.  Depending on the drugs employed it may take as long as six months for the viral load to become undetectable. Continued and reliable HIV suppression requires selection of appropriate agents and excellent adherence to treatment. HIV viral suppression should be monitored to assure both personal health and public health benefits.”

We think this is information that everyone who’s living with HIV deserves to hear loud and clear. We are committed to sharing this incredibly important message as widely as we can.

That’s why we created this short video “Love & Suppression” which features a Dublin couple who were part of the PARTNER study—the study which provided the conclusive evidence for U=U.

If you want to learn more about the science behind U=U, we recommend the Prevention Access Campaign’s website. The Canadian organisation CATIE has a great blog post here that explains why they are part of the campaign.